Attended the Porsche Club annual dinner tonight. My second social event with this group. Fun group, variety of folks. A lot of folks were quite down to earth.

I already knew Michael planned to do more car events this year. We'll see if J gets into kart this year. going to be tough to beat horses.

Posted via LiveJournal app for Android.

I see the last time I posted was in September 2012. The other day, I received a notification to renew this account, which I just renewed.

So here we go and see how it goes for 2014. As for today, Jana and I are still recovering from our colds so it was supposed to be a light day. I think the LA commuting helped to wear us out some. We hooked up with Malibu Riders again. Last July, we trailed Paramount Ranch. Today, we did Malibu Creek Canyon. It was really neat. We start off going through a former Ronald Reagan Ranch and went on a 3 mile trail that he started a long time ago.

Our guide shared a story of the yellow, "divorce house." An impressive house in our view towards the latter part of our trail, that was the subject of a divorce settlement between Charlie Sheen and Denise Richards. The court awarded her the house, but as Charlie moved out, he had the house painted her least favorite color, a terrible yellow, and then lacquered to be difficult to paint over. The house to today, remains the same yellow. 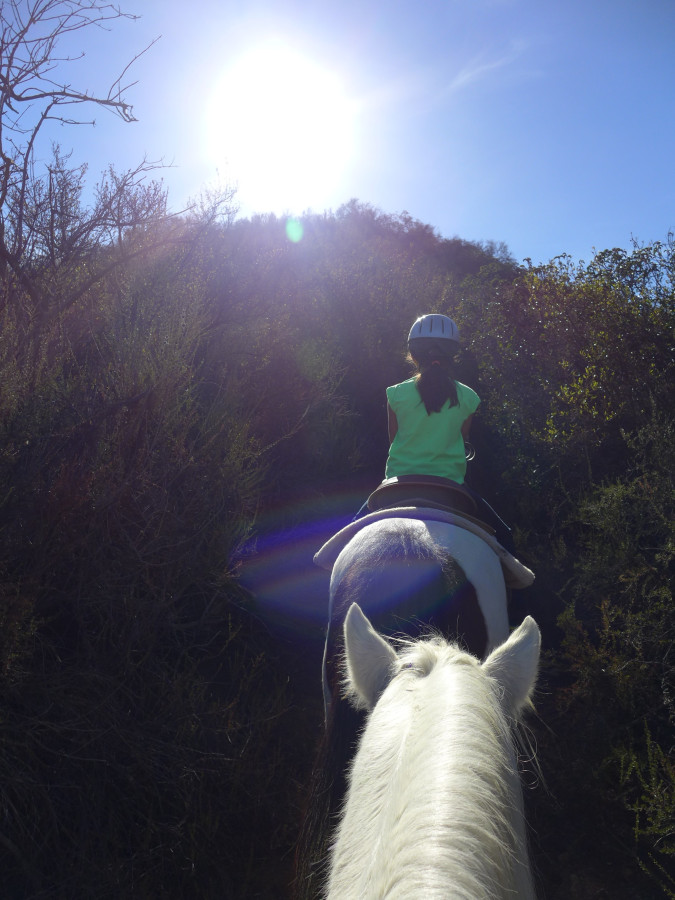 Saturday was supposed to be simple, Michael goes to Cars and Coffee and Jana and I hit the library and stop by the bank. While I was getting myself and task list together, I asked Jana to get dressed to go to the library. She dressed up. I figure, okay, we're due for her annual birthday photo shoot. This year, we did our shoot at Phipps Conservatory. Our Courtyard was looking too to quietly work there as we've done before. Then it was followed up with Oktoberfest at Hofbrauhaus.

On the way back to the car, she asked to stop at Claire's. I noticed a sign saying the do ear piercings. So I figure that it's been 6 months since we had to deal with the ear and ER incident, it's time to re-pierce the left ear. The right ear was fine, I was able to keep that one open. Michael and I discussed this briefly and figured, with her birthday this week, this might be great timing for her to wear earrings again. She loves accessorizing.

Than came Sunday, Chinese Academy School followed by driving around the city and seeing sights. Then we introduced her to, "Monty Python and the Holy Grail" and, "Roxanne." I love hearing her cackle. It's a great laugh. We also introduced her to absurd British humor.


One of my favorites from our little photo shoot.

Our, "Hunger Games" DVD arrived yesterday, and we've already watched it twice. J has pointed out, "I like her boots." "And those boots." "I like that dress." "I like her arrows." "Oh, the horses!"

Met Michael for lunch in Sq Hill then took the bus back to campus. Got a chance to meet a 102 yo woman who was very elegantly dressed get off the bus at my stop. 102! It took her about 5 min to get the off the bus, but everyone else was in awe. Several stepped forward to assist her with her walker and her things. Even the bus driver was impressed, "I've been driving the bus for 20yrs, and I thought you were in your 80s!"

Okay, so I only have this old photo of Jana for this post. I'll have to fix that soon.

Today was the last day of summer session chess club. Jana is a member of the Pittsburgh Chess Club and of the US Federation Chess Club. Yes, she has a number and a card. She's in the Beginner Class, but at school, she received a second place ribbon among the 2nd graders. The kids in this class are a tad more hardcore.

They met 6 times: she tied 3 games, won 1 and lost 2. She tied today against one of the kids who got 2nd place for the summer session. She's getting better. She really likes chess. I'm impressed.

I just have a really hard time watching. Today, her opponent's Queen checked her King. She could have easily captured the Queen with a Knight. But noooo. I paced the classroom. I bit my tongue. I eventually sat in a corner staring at dust. Once, I turned and saw she was on another turn. That stupid Queen and the stupid Knight were still in their same places. I began to visually slam my head against the wall. Then when time was called, the coach tallied up points and called a tie.

I was so worked up when we got home. Sigh. Please pass the scotch.

Towards the end of the term, Jana's science teacher brought in larvae of silkworms, assigned to each student in class. J called her's, "Chomper." Actually, when I got to know him, it was an appropriate name. The silk worms were still young caterpillars on the last day of science class. Students were invited to ask their parents if they could take them home. They just feed on mulberry tree leaves. We volunteered since there is a large mulberry tree around the block, we pass by it daily to the school bus stop.

What made it even more interesting was that Jana and Michael were scheduled to leave for Myrtle Beach, SC the following Monday. So we packed up the worms and leaves for their road trip. When they arrived, my in-laws met them and eventually, it was my MIL who took care of the silk worms while in Myrtle Beach.

On Tuesday, I flew out to Las Vegas for work. I eventually met up with them Sunday in NC, where J and Michael picked me up at the Raleigh Airport. There I was, at the airport, with a bunch more freshly harvested mulberry leaves.

The silk worms had more than doubled their size over the past week. Then on Wednesday morning, they refused to eat and by noon, they were spinning their cocoons. So much for the 1 hour I spent harvesting, cleaning and packing the mulberry leaves.

About 2 weeks later, Chomper had broken out of his cocoon. Within days, he/she laid eggs and is now dying. What a life cycle they go through.

I'll post photos in a follow-up post. In the meantime, here's a link to learn more about silk worms.

Had an interesting afternoon. While we were at my in-laws, grandma wanted a closer look at Jana's earrings. What they found disturbed Michael a little who decided to wake me from my post double-serving-of-wine-with-lunch-nap on the couch with a cryptic message. He then leaves. I sat up and saw my kid happily come into the dining room with grandma to work on the Pixos kit she got in her Easter Basket.

"Ok, is there an emergency? What is the emergency? The kid looks happy..." ( Collapse )

Hypothetically, do we still need unions today? And if we do, is there transperancy and accountability? I do not really understand much about the economics behind unions.